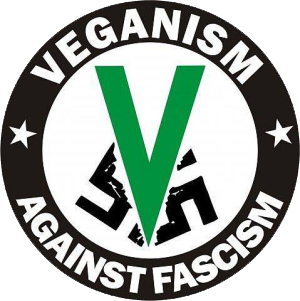 The recent announcement by the Hunt Saboteurs Association that they are affiliating with the Anti-Fascist Network has ruffled a few feathers in the animal liberation movement. There are those who claim that animal liberation is a “non-political” movement and that we should avoid aligning ourselves with “extreme left-wing ideologies” (yet make no mention of extreme right-wing ideologies). This all comes at a time of growing concern over attempts by the far-right to infiltrate the animal liberation movement in the UK, as they have done in other countries.

We at Baring Teeth hold a zero-tolerance policy for fascists. The animal liberation movement is a political movement, one that stands in firm opposition to oppression (not just the oppression of animals by humans). Because of this we believe that fascists and other people with extreme right-wing views should not be made welcome in our movement.

Not convinced? Here are 4 good reasons why we believe fascists should not be allowed in the animal liberation movement:

1. Fascism is an ideology built on oppression

Fascism is built on concept of one group of people ruling over another. Whether this be a particular race; nation; or class they believe that there are always superiors and inferiors. This runs in complete contradiction to animal liberation that believes that all sentient beings, human or non-human, deserve the same fundamental rights. Animal liberation is built upon opposition to speciesism, the belief that one species is more deserving of rights than another. How can we claim that all animals are equal yet allow people who believe in the superiority of their race or nationality? How is that any different to a human believing they are better than another animal?

Probably the most common claim thrown at us by fascist-apologists is that we are attempting to split the movement. That couldn’t be any further from the truth. The reality is that fascists seek to divide the movement by discriminating against people of different ethnic, national, racial, gender or sexual backgrounds. We understand that to create a movement capable of ending animal exploitation we need to work with people from all backgrounds. How can we remain open and inclusive to all these different people when we allow fascists to walk amongst our ranks spouting divisiveness and hatred?

Despite their claims otherwise, fascists support capitalism and the current economic system. They may claim to want to remove capitalism and replace it with something different but like the so-called communists it is simply a trap to lure you. Once they gain power fascists protect the interest of the bosses while the rest of us continue to live in poverty. Meanwhile capitalism continues to kill billions of animals annually through factory farming, habitat destruction, global warming and other means. If we really want to create a world free-from animal exploitation then we need to do away with the system that perpetuates it: capitalism. Fascists are the foot soliders of the bosses, brought out to defend their privileges in times of crisis. This can be seen by their constant attacks on left wing and anti-capitalist meetings and activists.

4. Fascists have killed other activists

For a movement that prides itself on its non-violent tactics the animal liberation movement would do well to avoid fascism. Fascism is a violent ideology that seeks to use force to get its way. Anybody who stands in their way is considered a valid target. Just last June French anti-fascist and vegan, Clement Meric, was murdered by fascists in Paris. The anti-fascist rapper Killah P was stabbed to death in Athens by members of the neo-Nazi Golden Dawn in September of last year and in Russia scores of left-wing activists have been beaten and killed by fascists. Do we really want to be welcoming to a group of people who are willing to murder anyone they disagree with? It would be almost hypocritical for a movement that deplores the murder of millions of sentient animals.

While those of us at Baring Teeth identify as anarchists, we do not think that everyone needs to be an anarchist in order to be involved in the animal liberation movement. We understand that there are a wealth of different thoughts and tendencies out there and it is this plurality that makes us strong. However fascism is a dangerous movement that seeks to gain control and enforce their will on others. It is for this reason that we believe that the animal liberation movement must take a firm anti-fascist stance and not allow fascists to infiltrate our movement.

We recommend that groups sign up to, and display the Animal Liberation Hallmarks, as a way of showing their opposition to fascism and all other forms of oppression. They might also consider affiliating to the Anti-Fascist Network as the HSA did. We need to stand united in the face of the fascist threat and show that our movement is not a safe space for those who discriminate against others!