We’re pleased to present to you our interview with Matt Miner, vegan, animal advocate, shelter worker and writer of the up-coming four-issue comic series: LIBERATOR. Matt has been very supportive of our project since the beginning and we’re excited to have had this chance to speak to him about his project, his work with animal sanctuaries and his plans for the future!

BT: Hello Matt! Thanks for doing this interview for us!

No, thank you guys – really love your mission, already a big fan.

BT: Could you start off by telling us a bit about yourself? What sort of activism have you been involved in? What has been some major events that has led you to where you are now?

Well I’ve been vegan for about a decade – I got curious as to why vegans boycotted all animal products, started wondering “is it really that bad?” and googled up animal cruelty videos one night. I’d always considered myself an “animal lover” because I’d loved my cats growing up, but that night’s when I made that connection.

So after what seemed like hours of watching these videos, everything from Meet Your Meat to the undercover investigations into Huntingdon Life Sciences to ALF videos, I went pescetarian immediately and less than a week after that I realized how ridiculously easy it was to give up most meat so I went vegan, which is also ridiculously easy to do.

I was pretty heavily involved in the Huntingdon Life Sciences campaign for many years, along with anti-fur campaigns like the ones against Escada and Max Mara, plus vegan outreach type stuff, circus campaigns, and the New York City horse carriage campaign. More recently I’ve been involved in animal rescue of abused dogs and cats – my wife and I work in a pretty sketchy area of NYC and so we rescue, foster, rehab and rehome animals.

Ever since learning of the ALF I always thought these folks were like superheroes for animals – I’ve always been a vocal supporter of the underground and have supported our prisoners, but I wanted to do more. These activists are labeled “terrorists” for helping animals and, being a lifelong comic book fan, I saw an opportunity to put a comic book into the mainstream market that accurately portrayed these masked vigilantes as the compassionate crusaders they are and didn’t sugarcoat the awful truth of what we do to animals. 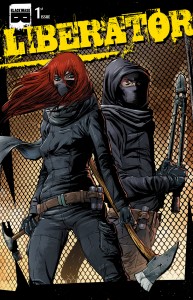 BT: Which leads us nicely onto our next question: You’re writing a new 4-issue comic series called LIBERATOR, can you tell us about that? What do you hope to achieve with LIBERATOR?

LIBERATOR is a gritty anti-hero adventure story featuring two underground vigilantes who take action in defense of animals. Clearly it’s inspired by real events and actual people – the men and women who take to the night under the name ALF and rescue animals and destroy the profit motivation of abusers. I hope to achieve three things with LIBERATOR – I want to bring more people to comics, I want to use this non-preachy vengeance story to bring new eyes to animal issues and I want to help fund my continued animal rescue work in the Rockaways, New York.

BT: Apart from the obvious issues surrounding animal exploitation are there any other topics that you hope to discuss with LIBERATOR? How have you found promoting radical politics within the comics industry? The comics industry isn’t exactly known for it’s politics at the best of time, what are some of the major issues you see within the industry and comics in general? 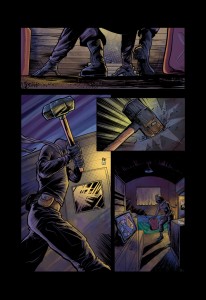 there are some issues within comics when it comes to the treatment of women both on and off the page and I want LIBERATOR to be a positive force for good for the people who pick the book up and give it a shot.

So you’re never going to see the female heroes of LIBERATOR posed in unnatural ways in order to provide the sexiest shots to the male reader, nor are the female characters there to be used as a prop or a “girlfriend” or sex interest. Our characters are all strong fully developed individuals with their own personalities, interests, goals and motivations.

The Rockaways is the name given to a little peninsula of Queens, NYC that was nailed hard by Hurricane Sandy. When the storm came we stayed behind because we had animals, including fosters, that we weren’t about to abandon, and we knew that in the wake of the storm there would be animals who needed help. After the storm passed and we were rebuilding our house we found that a lot of abandoned houses were now being used to warehouse fighting dogs, plus the streets are crawling with house cats who were left behind when their despicable owners left town. So we’ve had our hands full.

I appreciate and respect anyone who works for animal liberation and there are many areas where the struggle needs help. For my wife and I, we’re both vegan and worked for years on aboveground animal rights campaigns – hell, we first met at a home demo outside the CEO of Huntingdon Life Sciences’ apartment, we were engaged at the national animal rights conference and married at Woodstock Farm Animal Sanctuary. While we’ve worked in other areas of this fight, we found that we couldn’t turn our backs on animals in need who are literally right in front of us as we walk down the street so our focus is on companion animal rescue at this time. 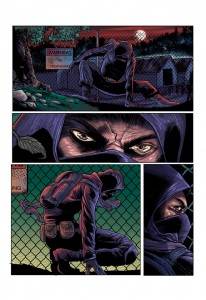 BT: It looks like you’re doing some really good work over there! We can’t wait to get our hands on the first issue of LIBERATOR either. When is it coming out? How can we get ourselves a copy?

Issue 1 is available for pre-order now! Pre-ordering for independent books is super  important because LIBERATOR is not BATMAN or SPIDER-MAN and shops will probably not order it if they don’t know there’s a demand. A lack of orders would result in  cancellation by the distributor, which would seriously suck.

All the info on how to snag yourself a copy is up at liberatorcomic.com

BT: I know it is early days at the moment but do you have any future plans for LIBERATOR or any other comic series? Are there any other issues you’d like to raise in future comics?

Well I have LIBERATOR stories for years, so if the first series is well received I’d love to do another, possibly focusing on Jeanette, the co-hero who I’ve personally decided is way cooler and more badass than her male counterpart. I have a story in OCCUPY COMICS #3 coming out in August that recounts my own experiences in Hurricane Sandy, what we went through, and how Occupy Sandy really saved the day out here. All the profits from that series go back to the Occupy movement.

I’d also love to do non-politically charged stories – I have a lot of ideas for both creator-owned books and licensed characters and I’m super excited to take a shot at telling them!

BT: Thanks for talking with us! Anything else you’d like to add before you leave?

Find me on twitter @MattMinerXVX for regular updates on LIBERATOR and my other projects, and always adopt, never shop!